History of Faces of Valor USA

Faces of Valor USA comes from the patriotism that beats in the heart of all Americans but especially that of Ted & Beth Levitt, previous owners of Chick and Ruth’s Delly in Annapolis, Maryland. 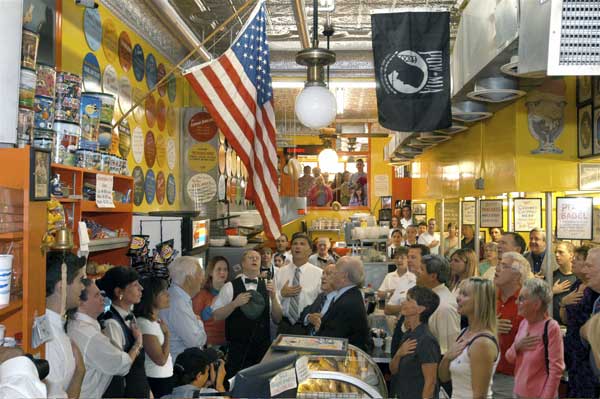 The patriotic Pledge to the flag of the United States of America is recited by he and his patrons Monday through Friday at 8:30 AM and on Saturday and Sunday at 9:30 AM every day of the year.

This has been a Delly tradition since since Feb 12th 1989, ever since Ted & Beth came back from Scott’s elementary school where they saw that their school day started without a pledge to the flag of the United States.

Ted & his dad, Chick, the founder of the Delly discussed this and thought this was wrong, and the very next day started the tradition that to this day is recognized around the world as being the very essence of a proud American.

So many of the patrons of the Delly over the years have been local and visiting military, police, firemen, EMS who have taken the time to express to Ted and Beth their heartfelt pride in this tradition.

In recognition of this feeling of patriotism and pride in America, Ted restored an antique 1931 Buick, painted it red white and blue, adorned it with some of the faces of people who were injured or killed in the line of duty.

With the specific goal of using it to raise funds to provide financial assistance and scholarships to the families of those wounded or killed in action, this car and the many charitable activities that have grown from it, Ted, in honor of his dad’s wish to see patriotism flourish, Faces of Valor USA has been established.

This site and all the efforts of the many volunteers, patrons, contributors is dedicated to the men and women who daily put themselves in harms way in order that we may enjoy the freedoms, liberties and justice of the American way of life.