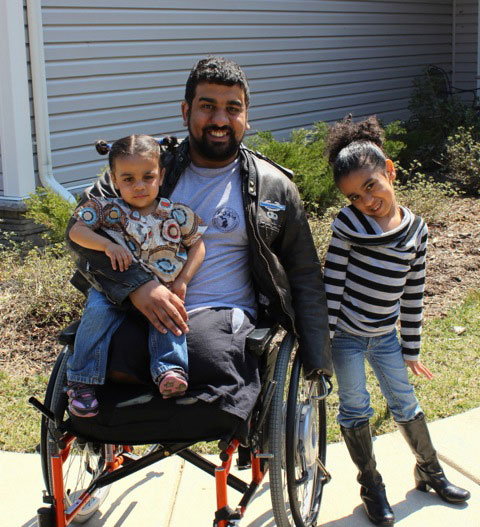 Army SGT Luis Rosa-Valentin was on his second deployment when he was left a triple amputee with hearing and vision loss after an IED explosion in Iraq in April 2008. SGT Rosa-Valentin was part of the 4th Infantry Division, acting as a point man on a dismounted combat raid just outside of Baghdad two days before his 25th birthday. During a six-hour firefight in an area filled with snipers and combatants, Luis assisted an injured buddy, helping to medivac him out of the area, all the while being shot at by snipers. After leaving the chopper landing zone and returning to the firefight, Luis was scanning the rooftops for snipers when an IED exploded directly next to him, immediately amputating his legs and left arm and leaving him unconscious. Regaining consciousness, it took immediate life saving measures to stabilize him enough to be transported to a local hospital. He was later airlifted to Landstuhl, Germany and finally to Walter Reed Army Medical Center where he remained for nearly a year and a half.

SGT Rosa-Valentin enjoys spending time with his two young daughters. Before his injuries he was interested in anything military related and had been since he was a young boy. Growing up in a military family Luis moved from base to base as his dad’s orders changed: living in Germany and then returning stateside to complete his middle and high school years at Ft. Meade in Maryland. A fan of UFC (Ultimate Fighting Championship) SGT Rosa-Valentin enjoys watching the fights both in person and on television. He enjoyed sky diving pre-injury and looks forward to obtaining his sky diving certification in the future.

When asked if there was anything he would like to say to those who have made this specially adapted home possible SGT Rosa-Valentin replied, “Freedom is not free… don’t forget the fallen soldiers and please, don’t forget the soldiers who return from war. Thank you Homes for Our Troops for this gift… this home will give me back my freedom.” The Rosa-Valentin family received the keys to their specially adapted home on September 11, 2009.

2012, Faces Of Valor USA is honoring Sgt. Luis and will be finishing off his basement & putting in an elevator for Sgt. Luis and putting a play room for his two beautiful girls Bella and Millie and also a Man Cave for The good Sgt. Luis.